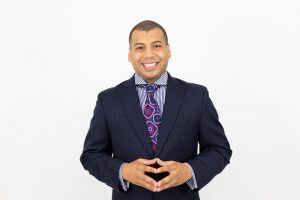 Guided by the principle that God has an intended purpose for his life, Paul M. Booth Jr. is the Lead Pastor and founder of Legacy Pointe Church in the northern corridor of Cincinnati launching in the fall of 2015. He previously served as the Executive Pastor of New Prospect Baptist Church in Cincinnati, Ohio. Before returning to Cincinnati, he was the Youth and College Pastor of the 4,000 member Zion Hill Baptist Church in Atlanta, Georgia A sixth generation preacher, Pastor Booth is a “young minister with an old anointing”. From preaching to his grandmother at the age of 8 to now ministering throughout the world as an ordained minister, Pastor Booth seeks to make the Word of God real to all nations and generations!

Throughout his educational journey, Pastor Booth has been afforded many opportunities that have elevated his intellectual aptitude. A Cincinnati, Ohio native Pastor Booth is a graduate of Cincinnati Hills Christian Academy Highschool. In addition, he is a graduate of DePauw University in Greencastle, Indiana, with a Bachelor of Arts in Political Science and a Minor in Religious Studies. He completed his Master of Divinity from Candler School of Theology at Emory University concentrating in leadership and ethics.  He also graduated from the Harvard Summer Leadership Institute. He is currently, pursuing a Ph.D. in Values Driven Leadership from the College of Business at Benedictine University in Lisle, Illinois.

Because of his great interest in ethical leadership he was afforded the opportunity to present his research entitled: “African American Leadership: “Incubating Ethical Agents for the Twenty‐First Century” at Yale University’s Bouchet Graduate Conference. He was also recently appointed to an International Commission on Evangelism in the Baptist World Alliance, which will take him to Santiago, Chile’ in the summer of 2012 to spread the message of Jesus Christ and aid impoverished communities. He is a graduate, of C-Change class of 2012 an innovate institute sponsored by the Cincinnati Chamber of Commerce that develops top young professionals who will be change agents in Cincinnati and throughout the region.  A firm believer in the Arts Pastor Booth serves of the clergy advisory board for the Cincinnati Symphony.  In addition, he was recently appointed to the advisory board of the Hospitality Management program at Cincinnati State.

Pastor Booth has sought to connect with the wider ecclesial community through the Progressive National Baptist Convention, founded by his grandfather, Dr. L. Venchael Booth. He is also a contributing writer for the Worker (the conventions’ quarterly devotional with a readership of 35,000), continuing a line of three generations beginning with his grandmother Georgia Booth. In 2010, he was inducted into the Academy of Young Preachers, an innovative movement underwritten by the Lilly Foundation to inspire and develop young pulpiteers and public theologians. A firm Believer that the world is his pulpit, he has appeared on Trinity Broadcasting Network’s (TBN) acclaimed show “Praise the Lord” where he shared the Word with millions across the globe.

More than any academic or professional honor, Pastor Booth truly has a passion for intergenerational ministry. Through his work as the Youth and College Pastor at Zion Hill Baptist Church in Atlanta, he developed high‐energy, spiritually and intellectually engaging programs for youth of all ages through developmental programs in academic advancement, service initiatives and praise and worship training that incorporated the knowledge, skill and talents of senior members of the congregation, forming a truly intergenerational ministry. Pastor Booth helped to form Zion Hill’s Vision Enrichment Team, which develops strategic plans, branding and publicity campaigns, community‐specific outreach programs, and growth projections to prepare the church to maximize their impact at their new location to a new 46‐acre site in South Fulton County.

Pastor Booth’s prophetic message of social consciousness, economic development, and spiritual renewal has afforded him the opportunity to share the platform with distinguished civic, religious and business leaders across the nation. More than that, he hopes this message of faith and self‐determination will inspire and empower people across the globe. He truly believes that all his blessings come from God and as such commits himself fully to the service of God and to humanity.

The Builder
LaMarqué D. Ward Sr. is an internationally acclaimed educator, speaker, author, trainer and Dream Building coach.  He is a captivating leader whose charismatic speeches influence students and professionals alike. Through profound insight, LaMarqué engages his audience by reaching common ground with others.

His Passion
His passion for unleashing potential in others is infectious – and he has created a guide to prove he stands behind this passion.  His first book “Competing as a Lifestyle You vs. You, A Student’s Guide to Greatness” has been successfully received. Even greater success resulted from his sophomore manuscript “Dream Building for Parents” and his anti-bullying book series “Malik’s Big Dream” and “Malik The Difference Maker.” His life experiences give him a unique credibility with his audiences – and his natural talent for connecting with people from any background gives him the ability to break through to audiences during his speeches and trainings.

An Expert
He is an expert in tuning into the needs of others by breaking down barriers in cultures that ordinarily hinder results.  He shares his life in the form of practical wisdom that is easily translated to his audience.  He does so by letting his audience know that, although his road was not easy, he did not let any barrier get in his way.  He turned every barrier into a teachable moment and these experiences, coupled with his academic achievements, have propelled him to a dynamic level of insight and wisdom. He has lead successful at-risk youth efforts in Cincinnati and around the country by providing expert level leadership development and coaching for staff. He also created several student interventions that focus on social emotional learning (SEL) for students.

LaMarqué is vice president of the Collective Empowerment Group Cincinnati, is the LSDMC Board Chair at Ethel M. Taylor Academy, and serves on the Executive Board of Rising Leaders, Pastor at Cincinnati Urban Ministry Outreach (CUMO), President of Dream Builders University and the COO of Charthouse Learning.
He holds an Associate of Arts degree from South Plains College, a Bachelor of Arts degree from Fairleigh Dickinson University, a Bachelor of Science degree in Christian Ministries from Faith Theological Seminary, a Master of Education from the University of Phoenix, a John Maxwell Team Certified coach, trainer, and speaker and a Paradigm 360 Certified Coach.